“Since joining the program, she has increased her revenues 15 times over and added 13 new jobs. Jess is an inspiring example of the hard working entrepreneurs in Detroit, and cities across the country, who are driving economic growth and adding jobs every day in their communities.” Katherine Jollon Colsher, Managing Director, Goldman Sachs; National Director, Goldman Sachs 10,000 Small Businesses

It’s not always easy to get people to see an old product in a new way. Just ask Jess McClary of Detroit, who’s working to convince Americans that vinegar can make for a surprisingly refreshing beverage.

If that sounds farfetched, guess again. McClary is the founder and CEO of McClary Bros., a local company that crafts and sells drinking vinegars (also known as “shrubs”) as a mixer for cocktails and sodas. With the help of some national television exposure, her unusual product has made a big splash.

Birth of a product

In 2012, McClary started a home-based baking business, selling her products at local farmers’ markets. The culinary school graduate was on the lookout for a unique product that would turn heads and generate buzz. That’s when she hit upon the idea for producing and packaging her own drinking vinegar, or shrub, line while conducting research on historic preservation methods.

In the colonial era, vinegar was used as a preservative for fruits and vegetables. Colonists would mix the leftover vinegar, infused with flavor, with rum or other alcohol to create new beverage concoctions.

The first challenge McClary faced was that there are no extant shrub recipe records. With no instruction manual, she drew on her culinary expertise and creativity to craft her own 21st century version of a near-forgotten traditional product.

She started experimenting in her home kitchen, mixing organic apple cider vinegar, organic cane sugar and fresh, locally sourced seasonal fruits, vegetables and herbs. There was plenty of trial and error along the way to finding the perfect flavor balance. 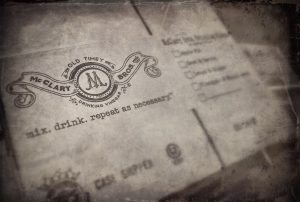 Before long she had her first two successful blends using rhubarb and mulberry. Within a few short months, McClary had pivoted away from her successful baking business and embarked on a new path as a vinegar entrepreneur-or as she’s dubbed herself, a “shrubist extraordinaire.”

The challenges of starting a small business

She named the company “McClary Bros.” for her now six-year-old twin sons, Jack and Ben. She at first cooked and packaged the product herself in a small rented kitchen, sourcing her fruits, vegetables and other inputs from local suppliers.

When demand picked up as adventurous customers at local markets responded positively to her blends, she needed a contract packer, or co-packer, to produce and package her shrubs in larger quantities.

McClary connected with Forgotten Harvest, a non-profit organization dedicated to ending hunger in Detroit, that had a sideline packaging fermented fruit products. She forged a partnership for them to produce her vinegars. That led to Forgotten Harvest establishing a for-profit arm, Hopeful Harvest, to specialize in producing small batch products for local food businesses.

That creative solution to her production challenges was fortuitous, because like many entrepreneurs, McClary did not start with a large pool of personal capital to fund her company.

A loan from a family friend covered some of the initial expenses to get McClary Bros. up and running, but the early stages of the business were a bootstrap affair, she says. She built the business incrementally, putting in more money whenever possible, while her husband’s job paid the family’s bills.

“There was just a lot of self-funding,” she says. “We just grew as much as we could, a little bit at a time, and then eventually in October 2013, my husband left his job and joined McClary Bros. full-time. It gave us the ability to scale that much more.”

A $40,000 small business loan from the Michigan Women’s Foundation in early 2015 brought welcome relief, even if it didn’t solve all the company’s funding challenges.

“You have to make it happen.”

About a year after her business began taking off, McClary learned about the Goldman Sachs 10,000 Small Businesses (10KSB) initiative, an education and support program for entrepreneurs that’s active in Detroit and many other cities throughout the United States. (Earlier this year, Project Invested profiled 8 Plato Beer Company, a Detroit-based craft beer retailer that also participated in the 10KSB program.)

Her participation in the program, McClary says, transformed her approach to running her business: “I went in a small business owner, but I came out a CEO,” she explains.

McClary describes the program as a “mini-MBA” for small business owners. By getting entrepreneurs out of their shops for one day a week to attend classes and seminars, the program forces them to look at their business from a larger perspective. That’s key, she says, because an entrepreneur has to learn how to think about their business as an enterprise, and not just a job.

Taking part in the Goldman Sachs program, talking to other business owners about what they were going through and working with a mentor, changed her perspective.

“As a CEO, you have to be strategic and plan,” she continues. “So now there are things that I’m looking at months or a year or two or several years in advance – you have to know where you’re going, otherwise you’ll make a lot of missteps along the way that will be very costly. It really taught me that it’s not just something that happens – you have to make it happen.”

The McClary Bros. product line got a huge visibility boost after Jess appeared on the ABC-TV reality show “Shark Tank” in September 2015, pitching her products to the panel of entrepreneurs in search of venture capital funding.

That pitch fell short-the “Shark Tank” moguls couldn’t quite work up the taste to invest. But for McClary, her prime time pitch was a major marketing win. McClary Bros.’ web traffic and online sales exploded in the days and weeks that followed her appearance on the show.

She estimates that McClary Bros. scored an extra $200,000 in sales in the three months that followed her appearance. Nearly a year later, she says that gambit still pays dividends as people recognize her from her appearance.

Growing toward the future

While the company is private and she doesn’t publish revenue figures, McClary Bros. has shown steady sales growth over the last three years, she reports, with 2016 year-to-date sales doubling over last year’s. McClary Bros. has hired thirteen people, including 6 employees (including McClary and her husband), and the company has opened a storefront tasting room where customers can sample drinking vinegars and purchase bar supplies and other mixers. Individual bottles and gift samplers can be ordered through the McClary Bros. online store as well as through Amazon.com.

“It has been amazing to see Jess’s growth since entering the program,” highlighted Katherine Jollon Colsher, Managing Director, Goldman Sachs; National Director, Goldman Sachs 10,000 Small Businesses. “Since joining the program, she has increased her revenues 15 times over and added 13 new jobs. Jess is an inspiring example of the hard working entrepreneurs in Detroit, and cities across the country, who are driving economic growth and adding jobs every day in their communities.”

A growing interest in craft cocktails over the last several years has helped spur that growth. Mixologists and imbibers have responded to the surprisingly different flavor profiles with enthusiasm. She hopes to see the product become a bar staple for flavoring and enhancing drinks, like bitters.

Aside from cocktails, McClary suggests mixing the shrubs with sparkling water to create a refreshing alternative to sugar laden sodas. And if you’re still not convinced of vinegar’s virtues as a beverage, you can still find plenty of uses for McClary’s products in the kitchen, from sprucing up a salad dressing to marinating meats. 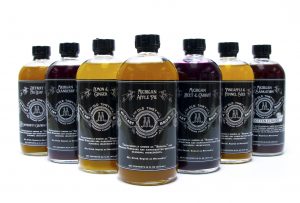 While the company’s national profile grows, McClary’s heart remains rooted her adopted home of Detroit, where the Chicago native moved with her family five years ago. While the Motor City has seen its share of challenges in recent years, notably the largest-ever municipal bankruptcy in 2013, McClary says she’s happy to be part of the movement to bring jobs and industry back to the city.

“If you’re here, it’s because you want to push and to drive and to fight and to make it what you know it can be,” she continues. “So there’s a lot of that unified strength that makes things come together. I’m really proud and excited to be a part of that.”