“A lot of it is to spread the good word and get these young women excited about our industry, that it is in fact a stimulating, rewarding, fun industry,” explains Seema Hingorani, Founder and Chair, “and also to help them build the confidence that they can do this job and do it really well.”

In September 2014, Seema Hingorani published a Bloomberg View op-ed that would become a clarion call for women in the financial industry.

Hingorani, a portfolio manager and the former chief investor for the New York City pension system, noted the relative lack of women in leadership roles in the asset management field, and suggested steps to address that gap. Pointing out that the tech industry had moved to address its gender imbalance through the Girls Who Code initiative, she urged a similar approach for the financial industry.

That was the birth of Girls Who Invest (GWI), an industry-led advocacy initiative aimed at boosting gender diversity in finance. And three years since the publication of Hingorani’s Op Ed, her concept has flourished into a non-profit organization (established in April 2015) with the ambitious target of having “30% of the world’s investable capital managed by women by 2030.”

It’s well established that greater gender diversity is a boon to productivity and performance, both at the firm level and that of the larger economy. (Project Invested looked previously at studies by Citi and Morgan Stanley that illustrate the economic benefits of gender diversity in the workplace). Yet the asset management industry—which includes mutual funds, pension funds, private equity and hedge funds, among others—continues to have a significant gender gap, with relatively few women ascending to the top levels.

More concerning, that gap appears to be growing. For example, the Wall Street Journal points to a recent accounting that since 2009, the number of female managers in the mutual fund industry has dropped by 10%. Overall, the asset management industry oversees decision-making on an estimated $71.4 trillion, yet only 1.1% of that total is managed by women and minorities, GWI CEO Kathleen Powers Dunlap says.

Changing that trajectory begins, Hingorani argues, with getting young women excited about finance as an academic and career option.

Hingorani advances the Girls Who Invest philosophy in a 2016 video interview: “A lot of it is to spread the good word and get these young women excited about our industry, that it is in fact a stimulating, rewarding, fun industry,” she explains, “and also to help them build the confidence that they can do this job and do it really well.”

As Hingorani describes the it, the solution is to address both the supply of and demand for qualified female candidates—first by encouraging more young women to pursue the field, and second by making the case to firms that boosting the number of women in leadership positions will be beneficial.

“Investment firms say they receive few resumes from women and are resigned to the lack of diversity on their teams,” she wrote in the 2014 Bloomberg op-ed. “This isn’t going to change unless we work harder to recruit women into the investment business — and strengthen the rationale for doing so. The solution lies not in prescriptive quotas but in increasing both supply and demand.” 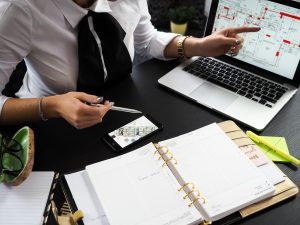 The linchpin of GWI’s educational outreach offerings is a four-week summer intensive course for college sophomores and juniors—Hingorani describes it as a “crash course MBA”—in which students are mentored in finance concepts and practices by financial industry executives and college professors. That’s followed by a six-week internship at a GWI partner firm for hands-on experience in the asset management environment.

Sixty young women participated in the summer intensive course this year at the University of Pennsylvania, up from 30 in 2016. GWI hopes to expand next year’s class to 100, thanks to the addition of a recently announced partnership with the University of Notre Dame.

Hingorani emphasizes that more gender diversity in asset management will bring greater diversity in thinking and investment style, which will result in superior investment outcomes in the form of higher returns. A greater balance in decision-making roles will ensure against missed opportunities and promote improved performance.

The initiative has already collected a number of high profile endorsements and support from industry leaders, including financial firms, legal firms and nonprofit organizations, who have embraced the GWI message of inclusion and gender equity. (A list of GWI supporters and patrons is available here.)

GWI could potentially serve as a model for other financial professional fields in which women are underrepresented. A 2016 study found that only 15-20% of financial advisors are women, for example, suggesting that field would benefit from a greater commitment to diversity, as well.

“Unfortunately, there isn’t one silver bullet to solve this problem. But the benefits of chipping away at this gender gap are enormous,” Ledbetter writes in a Huffington Post article praising GWI. “Raising the visibility of the profession and job opportunities, encouraging and empowering women, and changing the corporate culture so that women are sought out are all key parts of solving this pervasive problem.”