‘Capitalism’ is a Tarnished Brand, Despite Broad Support for its Many Benefits

‘We’ve Done a Poor Job of Telling Our Story to Millennials,’

Many of Whom Have No Experience With A Robust Economy

Arkansas Investment Banker Warren Stephens told attendees at SIFMA’s 2017 annual meeting Tuesday that young Americans have an alarmingly negative view of the economic system that has made America the richest and most powerful nation in the world, and this lack of understanding bodes poorly for the future of free enterprise.

“When Bernie Sanders carried 22 states in the Democratic primary as an avowed socialist, I realized we’ve done a poor job of telling the story… that capitalism is the great equalizer,” said Stephens, who in response has spearheaded a public awareness campaign called This is Capitalism that highlights the stories of successful Americans of often humble origins who embraced economic opportunity despite serious challenges.

“I don’t think capitalism has failed.  A lot of our policies around free enterprise have failed,” he said, citing a regulatory overload that leaves his relatively small firm answerable to seven separate federal regulators and, in addition,and regulated by state regulators in all 50 states plus D.C., Puerto Rico and the Virgin Islands. Often the results of this system are actually counterproductive, he said, noting that disclosure documentation such as 10k forms and balance sheets “have actually gotten more opaque over the course of my career.” 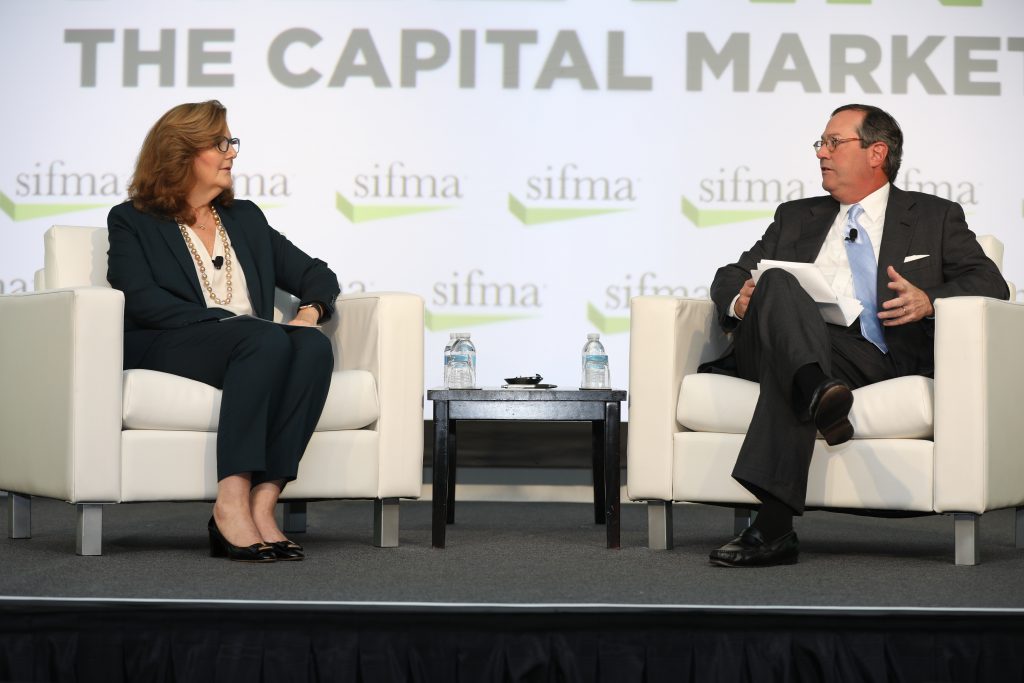 Questioned by Lisa Kidd Hunt, Executive Vice President of International Services and Special Business Development at Charles Schwab & Co., Stephens acknowledged that various scandals – from Enron to WorldCom to Bernie Madoff  – have also eroded confidence in America’s free enterprise system.  But more recently, “If you’re 30 years old, you’ve never had an economy that grew more than 2 percent per annum” for years at a stretch, he said.  “They’ve never seen the rising tide lifting all boats, as previous generations have.”

Stephens cited a 2016 a Harvard Institute of Politics poll of Americans aged 18-29 that found that fewer than half supported capitalism, while 51% opposed it.  Among the language used to describe capitalism, the words “greed,” “corrupt” and “control” were frequently mentioned.

Meanwhile only 20 states require any high school courses in economics or finance, he said, and very few students “hit the minimum bar on financial literacy.”  Ranked globally on this metric, the U.S. falls just behind Latvia.  “That’s just not where we need to be.”

In a May 31 Wall Street Journal op-ed, Stephens also noted the “disconnect” by which many young Americans who criticize capitalism simultaneously celebrate and admire entrepreneurs.  “The two go hand in hand,” he has said. “Entrepreneurs would make little headway without the capital markets to fuel the growth of their ideas and businesses.”

Stephens closed his talk by encouraging the securities and financial management industry to work to improve economic education and financial literacy among young people.  “If they graduate without knowing basic supply and demand, and how the economy works, they’re just uneducated.  The difference between 2 percent annual GDP growth and 3 percent is trillions of dollars.  And why does it have to be only three?  As well meaning as we try to be in our regulations, they’ve stifled growth and innovation and the benefits are going to smaller and smaller groups of people.”  Given this increasing concentration of wealth, and the slow growth of recent years, he said, it is perhaps not surprising that ordinary “people are going to question the benefits” of a system they don’t realize has been artificially distorted and hobbled.

“When millennials want to give back, and to get involved in their communities, we have to tell them: Here’s the best way to do that,” Stephens said.  Take advantage of the opportunities to build wealth, and when philanthropy beckons, “it’s not the government’s decision, there’s not some big plan out there – it’s your choice!”

This is Capitalism is designed “to put a human face on the economic system that has done more to create wealth and progress than any other system. To that end, the site spotlights a collection of stories of great American capitalists who embody the values of independence, innovation, and dedication.”

For more details on This is Capitalism, check out our previous Project Invested post