When Dean Sadek made his first visit to the Cultural Arts Academy Charter School (CAACS) in the Brooklyn neighborhood of Brownsville in June 2016, he was not sure what to expect. But as soon as he stepped through the doors, he knew this was a special place.

“I walked in and felt the warmth of the administrators and the principal and the dean of mathematics, and I saw how engaging and welcoming they were,” Sadek, vice president at Morgan Stanley in Manhattan, says in a recent interview. “And when I met the students and I had a conversation with them the first time around, I was blown away by how smart they were. These kids were way smarter than I was when I was that age. That experience, that one day, got me hooked – I wanted to be a part of that.”

For Sadek, that initial visit marked the beginning of a rewarding volunteer experience that would lead him to create a customized educational lesson for the school’s 5th graders centered on conceiving their own business launch and seeing it through to the IPO stage.

Sadek connected with the school through the SIFMA Foundation’s Invest It Forward initiative, an educational initiative that connects financial professionals with the organization’s Stock Market Game students in a classroom setting to deepen students’ understanding of the capital markets and financial systems.

Piecing it together: From idea to IPO

Sadek’s classroom visit was slated to begin in January. However, the students were not scheduled to compete in the SIFMA Foundation Stock Market Game until later in the semester. Seeing an opportunity to improvise, he decided to create a “pre-program” lesson to offer in the weeks leading up to the game’s launch that would add value. But would it work?

The school’s leaders gave him broad-stroke guidelines for what they hoped to achieve: they wanted students to boost their math skills, to better understand the capital markets, and to gain some understanding of the basics of economics. Sadek began brainstorming about what might complement the curriculum.

“I pieced it together that schools don’t do a really good job of explaining how entrepreneurs go from concept, to pre-IPO, to IPO, to being listed on the exchange,” he says. “Since we were showing students the Stock Market Game and how it works, we could also connect the dots or bridge the gap to show how they got there.”

For his teaching module, Sadek decided on what Hollywood might call a “prequel”—telling the story of what came before. With his financial industry experience, he landed on the idea of developing a business start-up lesson to walk the kids through the process, from conceiving the business plan all the way through to going public through an initial public offering (IPO).

The goal was to teach kids the origin stories of the businesses they would soon be studying in their upcoming Stock Market Game experience.

To that end, Sadek divided the exercise into three fundamental stages, corresponding to the 90-minute classroom visits led by himself and colleagues from Morgan Stanley over the spring term. 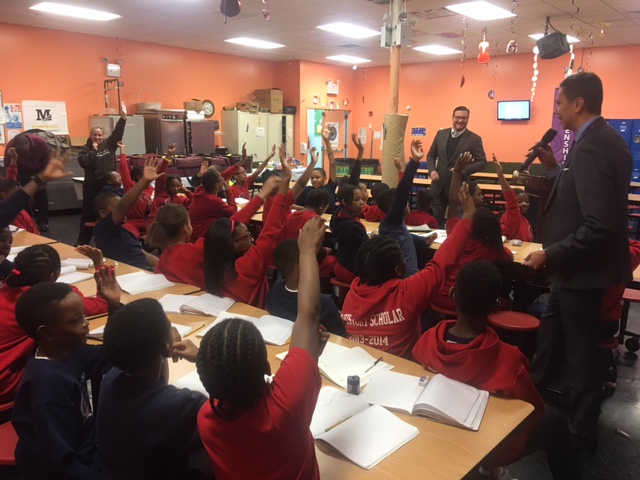 First, the process of developing and pitching a business idea. In this phase, students were organized into teams to brainstorm and develop ideas for “a product of service to meet a market need.” Each student was issued a paper “dollar” to represent their seed investment. Then they staged their own version of “Shark Tank,” with entrepreneur teams pitching their business ideas and fielding probing questions from the classroom “investors” and voting with their dollars on their favorite idea.

Second, making tough business decisions as an entrepreneur to grow your company. In this phase, corresponding with his second classroom visit, Sadek fast-forwarded the story a few years, providing the students with hypothetical financial performance numbers he generated for The Origami Café, a now-growing business. He presented them with challenging questions as to how they could finance their continued expansion.

Third, walking the students through the dynamics of the IPO process. While big-ticket IPOs often score heavy media coverage, few people really understand the pricing dynamics that shape the offering.

Sadek and his team then walked them through, step by step, what would happen on IPO day, as shares were offered first to institutional investors (which he tied to their parents’ and teachers’ retirement and pension savings) then to a wider range of investors.

The key lesson, Sadek explains, is to help the students understand that business success doesn’t just happen by chance or magic—it’s the result of a long process of forward thinking, careful decision-making in an environment of uncertainty, and hard work (plus luck, in the form of good timing and favorable market conditions). Even the most successful entrepreneurs and founders meet with failures along the way.

“I connected the dots for them to get to that point of ‘here’s what can potentially happen with a good idea and the right investment’,” he explains.  “Whether it was Steve Jobs or Mark Zuckerberg, they had an idea that they were able to make tangible,” he says. “And ultimately, their companies are now traded on the market and are worth billions of dollars. So that was the real benefit from this exercise.”

But the students weren’t the only ones to benefit. For Sadek and his colleagues, the effort became a passion project that he found to be challenging and enterprising.

“I was up many late nights doing this, but it was all worth it,” he says. “If you have something you’re passionate about, you’re going to cut into your sleep, you’re going to wake up early in the morning, you’re going take time on the weekend to work on it, because you really want to make sure that it’s a good product.”

Sadek emphasizes that while he spearheaded the effort, he could not have pulled it off alone. The commitment he got from Morgan Stanley, which places a priority on community engagement and volunteering, and his colleagues, who helped him run the sessions, was essential. Morgan Stanley is a leading partner with SIFMA Foundation and Invest It Forward, and has engaged thousands of financial professionals in the Foundation’s volunteer opportunities across the country each year, both in person and online. 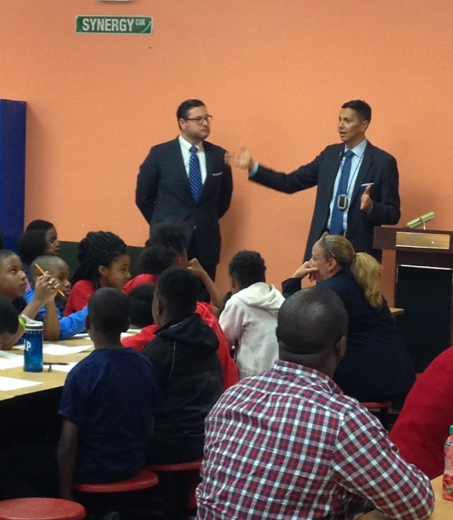 Moreover, the support of the administrators and teachers at the school was fundamental to Sadek’s success. Dr. Laurie Midgette, founding principal of the CAACS, describes Sadek’s contribution as a “transformative experience” not only for the students, but also the educators.

“We have a Wall Street banker who is taking time out of his very busy schedule to travel to one of the poorest communities in New York, for the purpose of teaching the children who live there how to build wealth,” Midgette says. “Who does that? Only the Dean Sadeks of the world!

“He helps me as the school leader to validate my belief in the educability of all children, no matter their zip code,” she continues. “His mentoring has had a direct and measureable impact on each student’s learning, attendance and engagement, particularly in their mathematics and social studies classes.”

What’s next? Sadek says he envisioned developing his lesson into a turn-key activity that to be shared with other schools participating in The Stock Market Game program. That meant keeping careful after-action records throughout the first presentation of the lesson as to what was successful and what needs work.

“We take very strict notes and make adjustments, because we want to perfect it so that at some point in the future it will be scalable and can be used anywhere,” he explains. “It started in Brownsville, Brooklyn, but it could be applied anywhere.”

For Sadek, it’s important to teach these lessons at a young age, since these students will be the investors, taxpayers, entrepreneurs, professionals, executives, teachers and community leaders of the future. In that sense, his time spent helping them in the classroom is a different type of investment—and one he expects will pay significant dividends in the future.

To meet Dean Sadek and learn more about the story of his participation, check out the following video:

*Photos and video courtesy of the SIFMA Foundation