Why We’re So Divided, & How Better Financial Policy Can Help

By implementing regulatory reform for community and regional banks, we should be able to get business loans to more entrepreneurs. Main Streets across America will see boarded-up storefronts replaced by new nail salons, barber shops, restaurants, and maybe even (gasp!) new community banks.

When I was in elementary school, I remember a classmate who thought it was amusing (as only an 8-year old boy would; he’s now a very decent man and father) to pull a mean trick on his cat and his dog. He thought it was funny to put them both in the closet and then listen to them snarl at each other. Not very nice, right?

Does it occasionally feel like DC is that kid, and those pets are the American public? We’re a divided country, often clawing at each other due to tensions caused by poor policy made in DC. Meanwhile the Washington metro area is thriving due to ever-expanding government and the paychecks of those who are paid to influence it.

It doesn’t have to be this way. With smarter, pro-growth policies, we can achieve shared prosperity. Let’s look at a couple troubling trends that we can rectify with better regulation.

Only the “1%” are making money from the best investment opportunities.

Check out the chart below. Successful startups used to have IPOs early in their growth spurts, which meant Main Street investors could buy shares in Apple, Ford Motor Company or Wal-Mart for their IRAs or via a pension fund. But as the headline says, “Almost all the returns are now private.” Newer success stories like Twitter and Yelp create almost all their value while still private companies. Because of the “Accredited Investor” rule in the U.S., only the elites are making money off these deals. Isn’t it odd that in a time when inequality is a hot topic, it is official U.S. policy to exclude “the 99%” from gaining wealth via private companies? 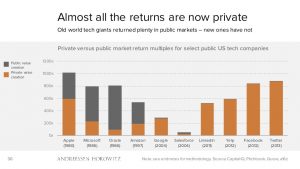 A glaring example is Uber, which STILL isn’t a publicly traded company despite being worth over $60 billion. So that’s $60 billion of value that has flowed to a select group of people in what are likely a small handful of ZIP codes.

There are two ways to fix this problem: Make it easier for companies to go public, and expand the pool of “Accredited Investors” so more people can benefit from pre-IPO value creation. Regarding why we need to reduce the hassle of going public, here’s Forbes columnist Henry Blodget:

“So, why is it that companies don’t go public anymore?

Well, for one thing, there’s the cost. Thanks to the massive regulatory burden the country now places on public companies, it costs at least $5 million a year to be public. What small company in its right mind would want to pay that?”

Per making the Accredited Investor rule more inclusive, some help is on the way. “Crowdfunding” is a new legal means for many Main Street investors to invest in startups. But there’s much more than can be done to spread prosperity to those who aren’t enjoying much of it.

The Dodd-Frank Act Is Making Our Recovery Weak…And Very Uneven.

Research by AEI’s Peter Wallison (and board member of MSGP, my organization) demonstrates that Dodd-Frank is the single biggest reason why enough new businesses aren’t being started. Our historically weak, oddly geographically-constrained recovery is because small-business loans have never recovered from the recession.

Simply put, the lawyers’ bonanza that is Dodd-Frank has allowed financing for big companies to recover while holding back the small loans needed by new businesses. If it sometimes sounds like Hillary Clinton and Donald Trump are talking about two different Americas, one gloomy and one more prosperous, it’s because both descriptions are somewhat accurate. To explain why, we just have to read this snippet from a Washington Post article titled “A Very Bad Sign For All But America’s Biggest Cities”:

“The recovery from the Great Recession has seen a nationwide slowdown in the creation of new businesses, or start-ups. What growth has occurred has been largely confined to a handful of large and innovative areas, including Silicon Valley in California, New York City and parts of Texas…

That concentration of start-up activity is unusual, economists say. In the early 1990s recovery, 125 counties combined to generate half the total new business establishments in the country. In this recovery, just 20 counties have generated half the growth.”

Isn’t that last statistic both amazing and horrifying? As the article goes on to say, “the sandwich shops of the world…are struggling; Google-type startups are not.” Note that Silicon Valley startups are funded by venture capital, which wasn’t affected by Dodd-Frank; hence that part of the economy is still doing ok. But most startups aren’t like Twitter. They are small businesses such as nail salons or sandwich shops. And their funding doesn’t come from venture capital. Those kinds of ‘startup’ businesses often need bank loans, and Dodd-Frank made these loans less profitable. That, right there, is a direct hit to the American Dream, and one fired from Washington.

Big businesses are still getting loans, it’s the small loans that Dodd-Frank has made less common. The graph below tells a sad tale, but one that explains much of the anger in this country. The red line illustrates the solid recovery in large business loans (over $1 million) since the financial crisis. The blue line is the small loans. You can see that there’s been no recovery at all in “sandwich shop” loans. If we add those two lines together, we understand why this recovery is both historically weak and geographically constrained. But the distance between those lines on the right tells us a lot about voter anger. If people think the system is rigged towards the “big guys,” well this graph shows some evidence for that view. 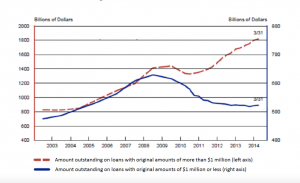 By implementing regulatory reform for community and regional banks, we should be able to get business loans to more entrepreneurs. Main Streets across America will see boarded-up storefronts replaced by new nail salons, barber shops, restaurants, and maybe even (gasp!) new community banks.

Kyle Hauptman is Executive Director of the Main Street Growth Project, an advocacy group focused on pro-Main Street financial policy, and is a member of the SEC’s Advisory Committee on Small and Emerging Companies. Hauptman was formerly was a chief economic adviser for the Romney for President 2012 campaign.