How much savings is required to pay for a college education? The answer depends on many factors. Is the school public or private, in-state or out, 4-year or 2-year? Is financial aid or scholarship money available?

We crows are smarter than people think. Let me illustrate with an old story about a thirsty ancestor of mine who discovered a large pitcher with water at the bottom . Its beak couldn’t reach the water, so the enterprising crow picked up a small stone in its beak and dropped it into the pitcher. Then it deposited another stone, and another, and many others until the water rose and enabled my ancestor to quench its thirst.

You may say it’s only a fable, but I say it was one smart crow. Researchers support my view, too, because they put crows to a similar test and found that they behaved much like the one in the story. I won’t crow about that, but I will stress the importance of the story’s moral: little by little solves the problem. 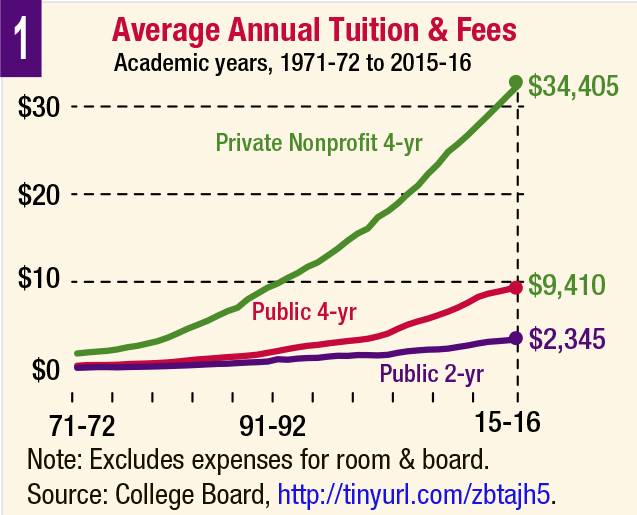 The lesson applies to financial goals – like having enough money to pay for education in a college or a trade school. Raising the money usually requires a little-by-little solution, which means a series of many additions to savings over time. That’s how a nest egg grows, which is no surprise to a savvy bird like me. After all, if you take the word crow and replace the c with a g, what do you get?

How much savings is required to pay for a college education? The answer depends on many factors. Is the school public or private, in-state or out, 4-year or 2-year? Is financial aid or scholarship money available? Chart 1 shows the “sticker prices” for one year’s tuition and fees at public or private 4-year colleges and at 2-year public colleges from 1971 to 2016. Multiplying these annual amounts by the number of years of attendance is enough to ruffle anyone’s feathers. What’s more, the costs have been soaring higher – about 7 percent per year, nearly double the average annual inflation during the period.

These expenses don’t even include room and board and all other typical costs of higher education. No wonder half of all families with children under 18 are setting aside some of their incomes for college. Chart 2 shows that in 2015 these savers had accumulated an average of $10,040 in their college nest eggs. It also shows the different ways they’re saving, the largest one being 529 savings plans.

A 529 plan is an educational plan that enables savings to grow tax free – as long as the savings are used at qualified educational institutions. These institutions include 4-year and 2-year colleges as well as trade or vocational schools. The plans have no age limitations, so they may be used for older people returning to school, for teenagers or for infants. Each plan typically offers a selection of mutual-fund investments; some also include exchange-traded funds (ETFs).

Although individual states sponsor the various plans, they’re not restricted to residents within each sponsoring state. For example, a resident of Georgia could select a plan from Nevada and attend a school in New Hampshire. All 50 states sponsor at least one type of 529 plan. Some colleges, universities and other educational institutions also offer 529 plans that enable people to pay for one or more years of tuition before a student begins attending the school.

Savings accounts are the next most popular method of financial planning for college. But near-zero interest rates have sharply reduced earnings on these accounts in recent years. “About half of the families saving for college are using general savings accounts,” reports Sallie Mae, the largest private source of student loans.
“These families could be missing out on the potentially higher yields that may be available from other types of savings vehicles, such as 529 college savings plans or investment accounts.”

The great benefit of starting early to save for college is the magic of compounding. Earning interest on interest received in the past compounds, or multiplies, savings over time. If you earned 7 percent per year, for instance, money saved today would double every 10 years.

On the other hand, I think of debt as saving in reverse. Money that could otherwise have gone into savings instead goes out to pay interest on debt. If debt gets out of hand, those payments can make us worse off.

I know how tough it can be to save money on tight budgets. So I understand why some debt financing has become a popular method of paying for higher education. Chart 3 compares the growth of student loans to the growth of motor vehicle loans and the rise of prices (inflation) for the last 10 years. The average student-loan debt has grown to $10,000 for graduates of 2-year technical schools, nearly $27,000 for graduates of 4-year colleges and almost $44,000 for those with higher degrees.

Whether financed by saving or debt, higher education is expensive. But it also has significant benefits. Going to college reminds me of someone starting their own business. Both take a lot of money, and they’re risky investments that one hopes will yield a return that justifies the cost. Chart 4 gives an idea of the return by showing how earnings and unemployment rates vary predictably with levels of education.

Do the monetary returns of higher education justify their costs? It depends. How expensive is the school elected, how many years will it take to earn a degree, what field is chosen as a major, what alternative earnings are given up to attend school- these and other variables determine the costs and benefits of pursuing higher education. I realize, of course, that the benefits aren’t all measured in dollars and cents. What do you think some of the non-monetary benefits of education in a college, university or trade school might be?